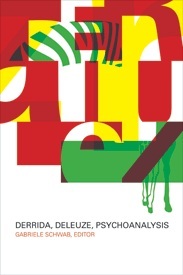 Derrida, Deleuze, Psychoanalysis explores the critical relationship between psychoanalysis and the work of Derrida ( Speech and Phenomena, Of Grammatology, and his later writing on autoimmunity, cruelty, war, and human rights) and Deleuze ( A Thousand Plateaus, Anti-Oedipus, and more). Each essay illuminates a specific aspect of Derridas and Deleuzes perspectives on psychoanalysis: the human-animal boundary- the childs polymorphism- the face or mouth as constitutive of ethical responsibility toward others- the connections between pain and suffering and political resistance- the role of masochism in psychoanalytic thinking- the use of psychoanalytic secondary revision in theorizing film- and the political dimension of the unconscious.

Placing a particular emphasis on liminal figurations of the human and challenges to discourses on free will, the essays explore shared concerns in Derrida and Deleuze with regard to history, politics, the political unconscious, and resistance. By addressing the need to overcome the split between the psychological and the political, Derrida, Deleuze, Psychoanalysis illuminates the ongoing relevance of psychoanalysis to critical interrogations of culture and politics.